Hurricanes are one of the most common natural hazards in the United States. To reduce fatalities and economic losses, coastal states and counties take protective actions including sheltering in place and evacuation away from the coast.

In collaboration with the Hazards and Vulnerability Research Institute (HVRI), this project utilizes billions of geotagged tweets as a new data source (compared to the traditional survey data) for evacuation analysis. Specifically, we concern different aspects of the evacuation triggered by a disaster event (hurricane) including evacuation compliance, evacuation destination, evacuation timing, and evacuation decision factors. Enabled by the Big Geo-social Data Computing Framework developed by GIBD, we analyze billions of geotagged tweets to reveal the collective and individual spatiotemporal patterns of twitter users’ locations, movements, activity spaces, social networks, and sentiments in the context of evacuation. Below are some findings for several selected research in this project. While we use twitter data in this project, the analysis methods developed here can also be applied for other social sensing approaches such as cellphone data.

Hurricane Matthew was the deadliest Atlantic storm since Katrina in 2005, causing havoc in parts of Haiti, Cuba, Bahamas, and the United States during early October of 2016.   This extraordinary threat provoked one of the largest evacuations in the United States’ history and also triggered a massive social media reaction. We developed a novel method to analyze millions of geolocated tweets to assess the evacuation response in South Carolina, which leads to an effective and nearly real-time way of measuring evacuation compliance.

The following figure illustrates the response to the evacuation order of the 1384 local Twitter users: (a) Local-user locations during pre-evacuation period (10/02-10/04). (b) Local-user locations during post-evacuation period (10/07 6pm – 10/09 10am). Blue dots represent the users who moved outside of the risk area (eight coastal counties), and red dots were the users who did not evacuate. Results show that 54.0% (747 out of 1384) of the local users evacuated for the entire study area, which is consistent with the findings in previous studies. For more information, please refer to  Martin Y., Li Z., Cutter S. (2017)  Leveraging Twitter to gauge evacuation compliance: spatiotemporal analysis of Hurricane Matthew, PloS ONE.

Hurricane Irma was the first Category 5 hurricane of the 2017 Atlantic hurricane season (https://en.wikipedia.org/wiki/Hurricane_Irma). The following figure shows the evacuation analysis for Hurricane Irma. Left map shows over 9000 local twitter users before the evacuation from Sep. 02 to 04, 2017. Right map shows the location of those twitter during the evacuation from Sep 09 to 11, 2017.  (Note that the analysis is based on a twitter dataset covering the the contiguous U.S., so users who traveled to other countries are not considered).

Analysis and Map by Martin Y. and Li Z.

People’s ability to evacuate out of their home county heavily relies on mobility, which also limits one’s activity space in the long-term. Twitter users’ geotagged tweets are one way to record their historical travel records. 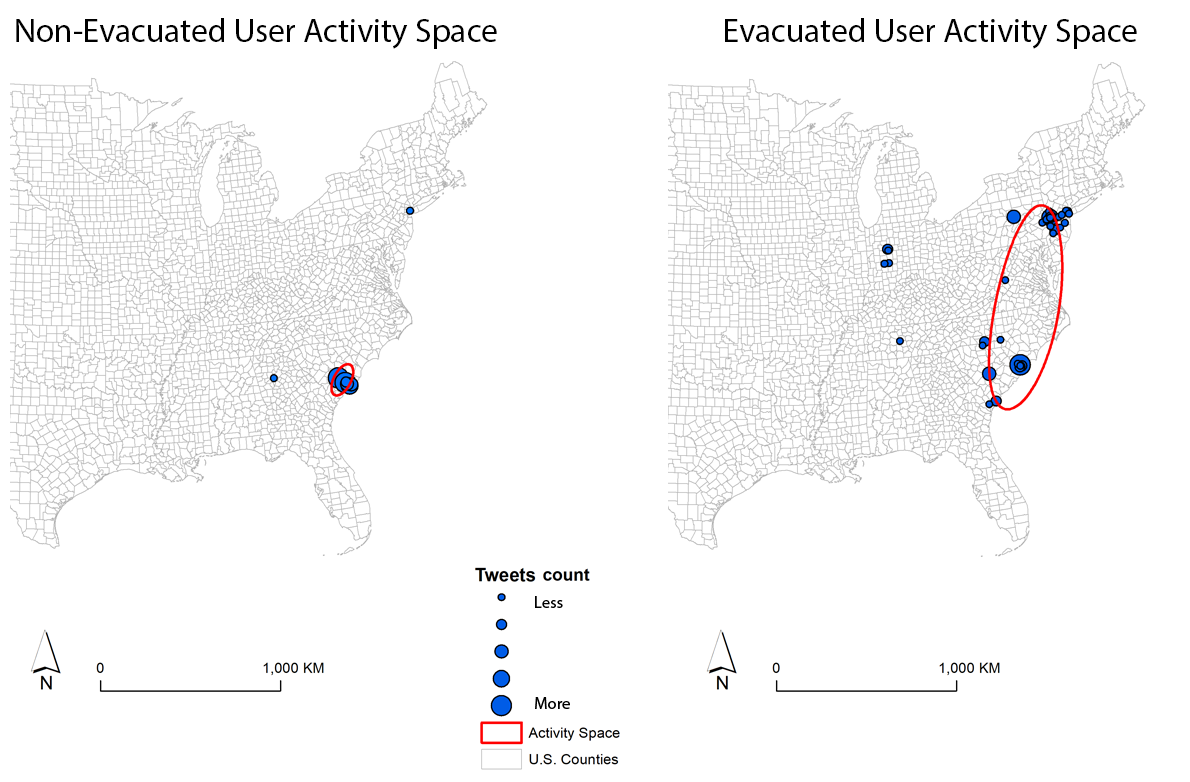 The influence of local neighbors, friends, or relatives on whether or not to evacuate can affect individual’s evacuation decision as illustrated during Hurricane Floyd (Dow and Cutter, 2002) and Hurricane Katrina (Burnside, Miller & Rivera, 2007; Taylor et al., 2009). Additionally, researchers found that seeing friends, relatives, neighbors, and other influential people actually evacuate is one important factor that convinced people to leave as well (Drabek & Boggs, 1968; Lindell, Lu, & Prater, 2005). 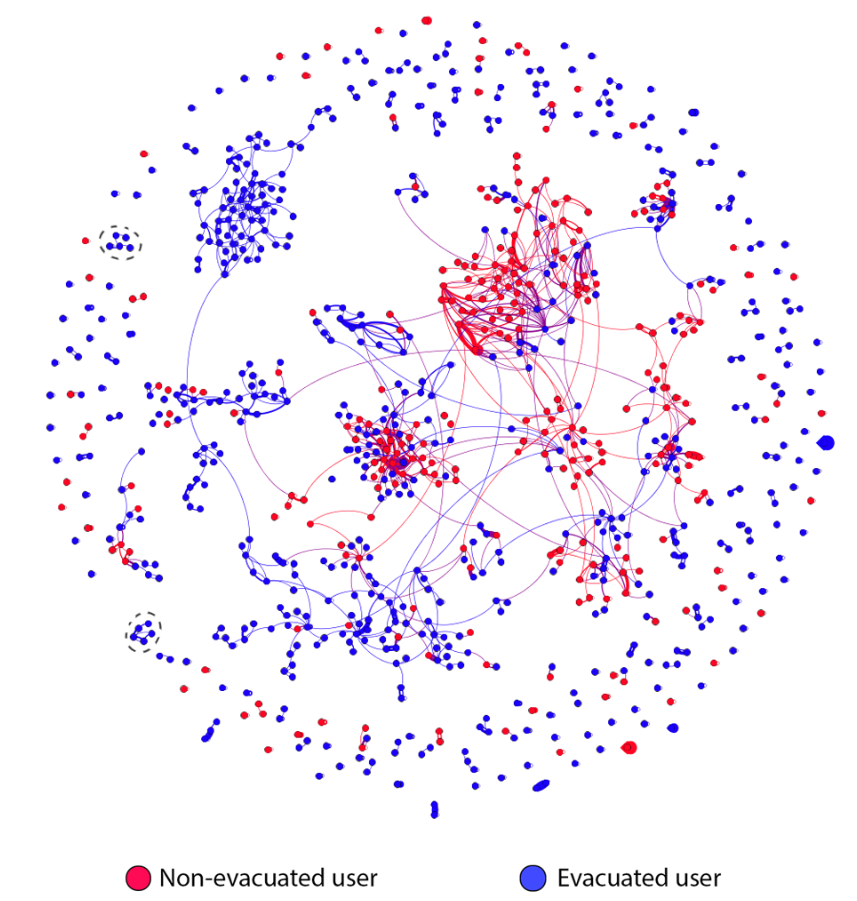